"SPIE - International Society for Optics and Photonics" awards MERMEC for excellence in technology, in a magical San Francisco night. The revolutionary diagnostic system for the inspection of tunnels, T-Sight 5000, won the prestigious " Photonics Prism Award 2011". 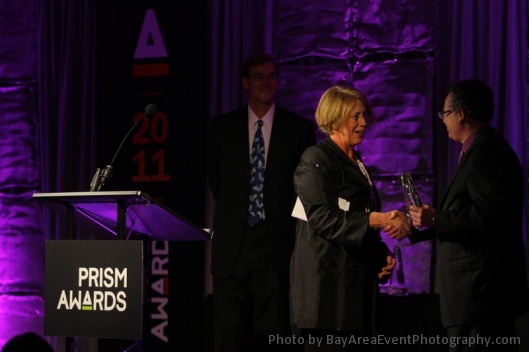 
San Francisco, USA, 25th January 2012 - The "Photonics Prism Award" is the most important event of the photonics industry, a gala during which the elite from the worlds of research, business and industry associations recognized the best products of the year. The award is inserted in the official program of "Photonics West", the leading international exhibition on optoelectronics, collecting this year’s more than 19,000 admissions, 1,150 exhibiting companies and more than 4,000 technical presentations. The award, known as the "Oscars of Photonics", has seen companies worldwide be subjected to an international jury of distinguished researchers, academic luminaries, venture capitalists and captains of business, and their products showcased to compete for the award of "Photonics Prism Awards" in different categories.

"I am very proud due to the great importance of this prestigious award," said Vito Pertosa, President and CEO of the MERMEC Group. "We have not only represented our country, the only Italian company selected, but we also paid tribute to the tradition of Italian innovation and quality with our T-Sight 5000 winning the coveted first prize in the category Detectors, Sensing, Imaging and Cameras, a prize that last year was won by the American giant General Electric."

The T-Sight 5000 is a revolutionary diagnostic system, unique in its kind that combines two different optoelectronic technologies to perform video inspection, measurement and automatic analysis of both tunnels and surrounding railway infrastructure. Designed to meet the extreme requirements of the Swiss Federal Railways, SBB CFF FFS, which has about 350 tunnels in its network, the T-Sight 5000 has gained international interest and recognitions for being the most advanced and accurate system available today on the world market.

"Mounted on the nose of a train," says Pasquale Antuofermo, Chief Engineer of the development team, "the T-Sight 5000 operates as a high resolution 3D scanner that captures everything that surrounds it and then analyzes it with powerful image analysis algorithms to automatically identify defects and anomalies. The heart of the product is an innovative illuminating system of laser emitters (more than 2700 mounted on a circular crown) and an ingenious system of mirrors custom-designed by MERMEC engineers deflecting the reflected light into the system’s optical groups. The T-Sight 5000 is also able to calculate the spatial coordinates of each point acquired - more than 5 million per second - making distance measurements and then comparing the data with the minimum distance allowed between objects and the rail vehicle."

"The T-Sight 5000," said Pertosa, "embodies the strong pioneering and innovative spirit that we have always offered our customers worldwide. In all these years we have made our ability to innovate the key to transforming new ideas into real products that meet our customers needs. All this was possible thanks to our staff and their capabilities. It is to their geniality, their curiosity and their ability to persevere that this award is dedicated; it is further encouragement and proof of what has been reached and what we plan to do."

The MERMEC Group, which has its headquarters in Monopoli (BA) and subsidiaries in the United States, France, Spain, United Kingdom, Norway, Italy, Turkey and China, ended 2011 with a consolidated balance sheet that met all of its targets, while recording at the same time, increases in orders, EBITDA and operating cash flow.

At the annual kick-off meeting, the company introduced the three-year plan 2012-2014, which provides, amongst others, a capital increase without the intervention of new shareholders, and ambitious investments aimed at increasing the awareness of the company in the world, new product development and an increased presence in key markets.